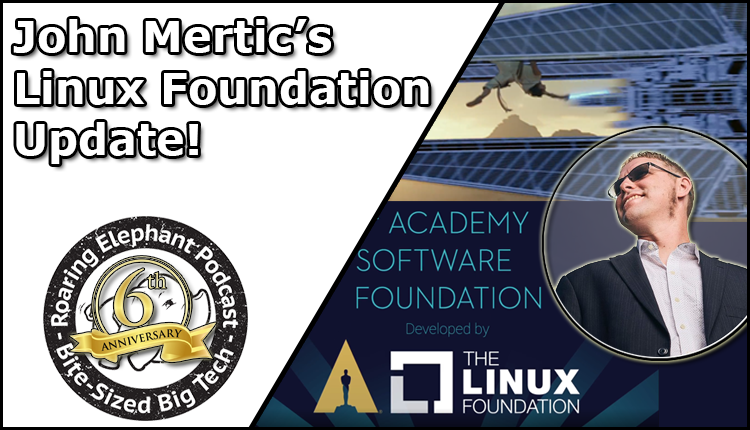 Another year of The Roaring Elephant Podcast has passed and as has become a bit of a tradition, we invite the incredible source of energy that is John Mertic over to talk to us about all the great stuff The Linux Foundation in doing. Every year, again and again, John succeeds in surprising us with all the different initiatives that are under the stewardship of the Linux foundation, and this year was definitely not an exception!

The Academy Software Foundation (ASWF) was founded in August 2018 by the Academy of Motion Picture Arts & Sciences (AMPAS) as a result of a two-year survey by the Science and Technology Council into the use of Open Source Software (OSS) across the motion picture industry. The survey found that almost 84% of the industry uses open source software, particularly for animation and visual effects, but challenges including siloed development, managing multiple versions of OSS libraries (versionitis) and varying governance and licensing models need to be addressed in order to ensure a healthy open source community.

The mission of the ASWF is to increase the quality and quantity of open source contributions by developing a governance model, legal framework and community infrastructure that lowers the barrier to entry for developing and using open source software.

LF Energy is an open source foundation focused on the power systems sector, hosted within The Linux Foundation. LF Energy provides a neutral, collaborative community to build the shared digital investments that will transform the world’s relationship to energy.

LF Energy brings together stakeholders to solve the complex, interconnected problems associated with the decarbonization of energy by using resilient, secure and flexible open source software. The digitalization of power systems enables the abstraction of the world’s largest machine into composable software defined infrastructure. Digitalization also means that operators can “network electrons” by orchestrating the metadata about an electron in ways never before possible. Digitalization facilitates a radically energy-efficient future. When every electron counts, renewable and distributed energy provides humanity with the tools to address climate change by decarbonizing the grid, powering the transition to e-mobility, and supporting the urbanization of world populations.

The O3D Foundation (O3DF) is the umbrella open source organization that houses the O3DE project. The O3DF can be thought of as a sister foundation to CNCF or OpenJS, which serve as umbrella organizations under the Linux Foundation to house multiple open source projects and pool resources amongst the member community to sustain these projects. O3DE is the first project of the O3DF, but it is expected for the O3DF to house multiple projects in the future.

And some more Linux Foundation Goodness:

Please use the Contact Form on this blog or our twitter feed to send us your questions, or to suggest future episode topics you would like us to cover.

Tackler of advanced Cloud and Hadoop challenges in a world of open-source technologies. – Impossible is merely a matter of time and effort. – View all posts by Jhon Masschelein